Difference between revisions of "What is MorphOS?" 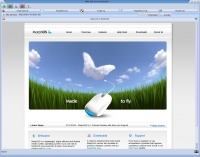 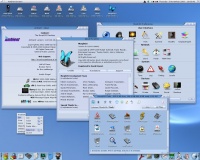 Supposedly this will be the most asked question among all readers of this article. It's likely that you never heard this name - MorphOS - before in your life, but it is extremely likely that you heard another name: Amiga. In this introduction it is enough to say that MorphOS is currently an enhanced clone of the AmigaOS (the Historical notes section explores some details of this connection).

Although a functional clone of the AmigaOS is a nice experiment, the real potential for MorphOS is found in its ability to provide for more advanced OS features not found in the AmigaOS. This is possible because MorphOS is built around a very flexible, powerful, and compact microkernel called Quark, whose structure is totally unrelated and independent from the Amiga and Linux kernels.

One distinctive feature of MorphOS is that it has a small "footprint". A complete installation requires just about 140 Megabytes for the whole OS and contributions. And much less is needed if one desires to optimise one's running environment and leave out unused and/or non-essential parts of the OS. Another distinctive feature of MorphOS is its speed. Even on a 400 MHz CPU the entire operating system and its applications remain responsive and quick to load at all times. Boot times for the operating system are short, and applications load up very quickly.

MorphOS is a proprietary OS except for some parts that are open source, e.g. its desktop Ambient or AHI, the retargetable audio subsystem. Since version 2.0 MorphOS is a commercial product, before it could be used for free. A full-featured but time-limited trial version can be downloaded from the MorphOS homepage. After 30 minutes of use, the system becomes extremely slow, but after a reboot you'll have another half an hour and so on until you register your copy and buy a licence, which is sold for 79 Euro (49 Euro for EfikaPPC and Sam460).