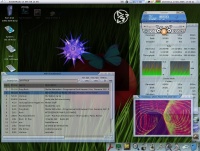 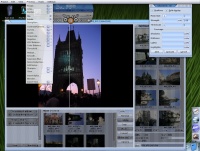 A list of tools ShowCase provides, the interface of one of them, and the new album manager
As the name says (and if for you it doesn't, it just means you are not geek enough), this is an image viewer. While the internal viewer of Ambient provides the required basic functions, ShowCase does a lot more: its interface is usually divided in two parts, on one side there are the thumbnails (with support of the Exif format in JPEG pictures, which means that it doesn't need to load a 3MB+ image just to show a 50×50 preview) and on the other side the selected image is displayed. The image can be viewed in full screen as well, can be zoomed in and out, and can be elaborated. ShowCase in fact features some basic image manipulation tools for adjusting colours, changing image resolution, as well as smoothing and sharpening operators, noise reduction, glow and blur effects, and enables cropping, rotating, flipping, as well as batch conversions. It is possible to use also a 3D view (with 3D accelerated rendering), but that's mostly a nice toy option.

Starting from the 2.0 release of MorphOS, ShowCase is provided with the OS itself as a contribution to be found in the Application directory, but additional updates are still available separately in the programmer's site. 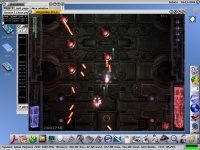 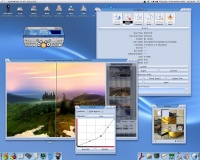