MorphOS basically *is* an Amigaish operating system in the sense of the Commodore Amiga OS 3.x. It started a bit more than 10 years ago with the aim to write an OS that is fully OS3.x compatible, shares the same API and the same logic to use. On top of a new microkernel (which is completely invisible to the user) there are the same OS compounds present like under OS 3.x.
The base of the system is build around exec, intuition and dos. The system is disk based. Harddisks use the RDB, filesystems as FFS, SFS, PFS work with MorphOS. Of course there is a Ram Disk. The layout of the system disk (sys:) basically is the same as under OS3.x and comes with these directories:


The directory MorphOS/ is a special one and rated as private. It contains a draft mirror of the sys: directory tree that includes the actual OS files. To keep the system clean it must not be touched by the user. The "kickstart" of MorphOS is included in a file called boot.img.
The DOS shares the same commands and syntax, but the shell console is MUI based and highly improved. E. g. it supports tabs, more commands, command completition, scrollbar, backdrops and so on.
MorphOS is directly compatible to most non custom chip banging 68k software as well as to PowerUp and WarpOS software. It is written by many of those folks who actively kept Amiga alive when noone else was there in the late 90ies. Early this millenium the MorphOS-Team was in negotiation with Amiga Inc. to make MorphOS the official successor of AmigaOS 3.x but eventually the conditions were unacceptable. MorphOS supported initially the P5 CyberstormPPC and BlizzardPPC expansion boards (support for these ceased with the 2.0 release), later the various Pegasos computers and the Efika5200B. Since recently MorphOS happen to support some Apple PowerPC gear (Powermac G4, Mac mini G4 and some eMacs). For a complete list of supported hardware refer to http://www.morphos.de/hardware.html. Maybe in some future MorphOS will shift the supported ISA, but not too soon.
For installation no 3rd party software is required (neither compounds of AmigaOS nor OS X). The demo version of MorphOS is freely available and can be used as live CD or for installation to a hard disk/usb stick.

Regardless of the actual hardware, whether it is a BlizzardPPC card or an Apple Powermac, MorphOS doesn't need a dedicated Amiga emulation - it just executes Amiga programs exactly as if they were MorphOS native programs. With one difference: the 68k code is translated to ppc code on the fly by the 68k JIT (code runs about more than 50 times as fast as on a 68040/25 with the MorphOS JIT on a G4/1500 - some more benchmark results).
Compability includes for example Photogenics, TV paint, Turbocalc, Wordworth, Amiga Writer, DOpus Magellan2, Imagine, Maxon Cinema, GoldEd, IBrowse, WipeOut 2097 to name just a few. But even very old applications like the program write from an old appetizer disk of AmigaOS 2.0 work on MorphOS. And there are also MorphOS versions of many well known Amiga applications provided - e.g. there is YAM, SongPlayer, AmIRC or AWEB.
Software that directly bangs the Amiga custom hardware (many older games or DPaint IV) usually doesn't work on MorphOS, but can be run with E-UAE. While E-UAE is not part of MorphOS itself it is freely available, (requires a 68k kickstart file though) and well integrated into Ambient (the Workbench replacement): adf files can get launched with E-UAE straightly. But you need UAE *only* for hardware banging stuff, non banging stuff is executed directly (even old 1.x programs).

The biggest difference to AmigaOS 3.x in everday usage is probably between Ambient and Workbench. Ambient is MUI based and offers really a lot, but looks a bit different to Workbench (but since MorphOS is fully skinable it can easily be adopted to any taste) and offers a bit different usability. This may need a little time to get familiar with, but after using Ambient for some time most people feel way more comfortable on Ambient than on Workbench 3.x.
The OS preferences are centralized in one application now with MorphOS. The datatypes concept is present also in MorphOS, but with Reggae there is a media streaming resource available which comes in handy where the datatypes are limited. It is especially made for media streaming. MorphOS comes with MUI 4.x, AHI and the usb stack Poseidon. The ARexx reimplemantaion is not complete yet, but the 68k rexxsyslib.library (obtainable from aminet) fills this gap. Icons are compatible, but MorphOS supports also png icons (stored as .info file).
The graphic system includes Cybergraphics (CGX) and provides hardware acceleration functions. For 3D graphics there is TinyGL which is a subset of OpenGL, Goa provides a compability to Warp3D.
There are a few applications included with MorphOS: The great webkit and MUI based internet browser OWB, Sketch (a drawing program), ShowGirls (a powerful picture viewer), a remote shell, kryptos (disk encryption tool), Elements, calculators, an editor and the games Diamonds, Morphtris and Shuffle.

For further information please refer to these resources: 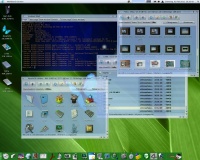 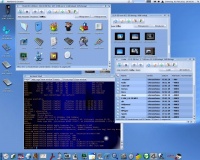 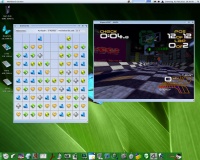 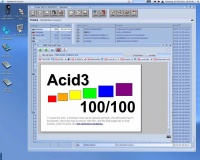 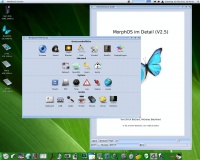