MorphOS updates have always contained a multitude of changes and improvements, but this release, version 3.16, really stands out from others we've seen recently. Many new components and programs are bundled into this latest distribution, where there has also been a focus on major bug hunting by developers with new debugging options. The new version is likely to be the most stable MorphOS release so far, improving the already most stable next generation Amiga compatible OS even further.

Please see the official release notes for a more detailed list of changes and improvements, not forgetting to check out other helpful and tutorial articles in the MorphOS Library, especially if you're new to MorphOS. This article only covers the most visible changes since the previous version.

MorphOS now boots on iMac G5/1.9GHz/17" (iSight) computers, but it's an "unofficially" supported setup and some features might not work as expected.

The user interface has been improved with several new features. These include window fading and opacity effects, an application switcher similar to mainstream systems, a notification management system, and mouse movement handling between displays on multi-display setups. 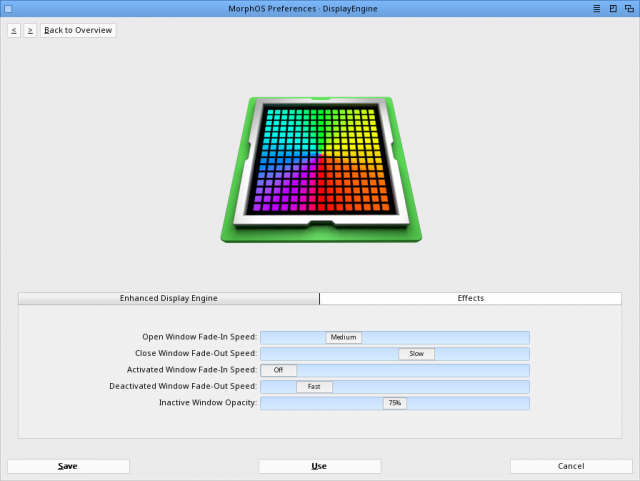 The Expose application switcher pops up a window to select a running application when the Command+Tab keyboard combination is pressed, which can also be configured to send ARexx commands to the application instead of just bringing a window to front. Expose is a commodity and its settings window can be opened by selecting Show Interface in Exchange, which is accessed from Ambient's drop-down menu, or keyboard shortcut Cmd+H. 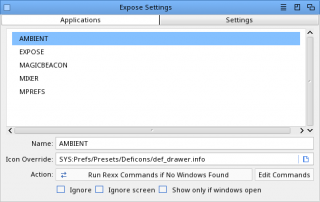 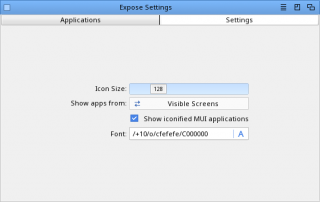 MagicBeacon is a highly configurable notification and messaging system which has been available as a 3rd party application, but is now integrated within the operating system. It's been heavily modified to use newer OS features and its settings are available via the main MorphOS Preferences application.

Notifications are triggered by system signals, programs that support MagicBeacon, or ARexx and Shell commands. When a notification is created by this method, MagicBeacon executes a pre-defined action. The action can either launch an external program or display information in the screenbar or in a popup bubble.

There are about 40 pre-defined notification types and users can also create their own. Notification actions can be configured globally or for a specific application's use. Bubble actions can also have buttons for user interaction, for example, to open a related directory or to skip a track in an audio player. 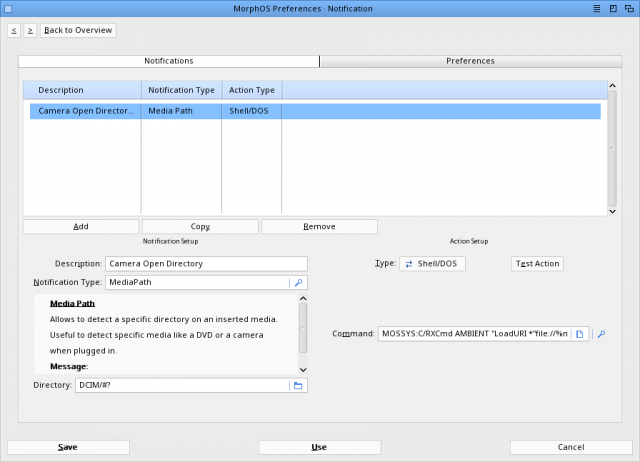 Notification support is now implemented throughout MorphOS, from mounting and unmounting drives to programs like Iris, Jukebox, Transfer, Grabber, Wayfarer (if notifications are enabled from its settings), and so on. Documentation on this topic can be found in the SYS:MorphOS/Locale/Help/english/MagicBeacon.guide file. 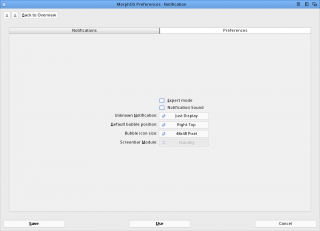 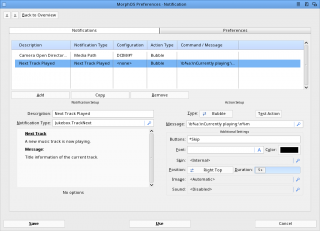 MorphOS 3.16 includes some interesting additions to Shell commands. The SendBeacon command can be used to create notifications from AmigaDOS scripts. The FileWrite command supports large files now and it can be used, for example, to create empty disk image files for emulator or backup uses.

The new Quote command can be used to quote strings, or encode text or binary files, in different formats. The source can be a file, string, or variable, and it can be converted to a standard DOS Command-Line argument, DOS pattern matching, ARexx script string, URI components, sh shell argument, JavaScript string, C string, hex, or base64. 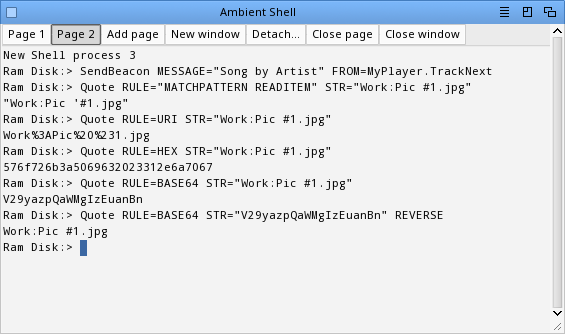 There's a new shared library providing the OpenSSL library functionality for programs. openssl3.library is based on the very latest OpenSSL 3.0.1 and using it reduces both application binary sizes and memory footprint, and incorporating security updates is made easier too. Programs utilising SSL in MorphOS have been upgraded to use the library. As a result it offers a cleaner, newer, and native alternative to the non-native and messy AmiSSL from 3rd party developers.

3D graphics support has been improved by new fixes and features in TinyGL which should, for instance, help porting certain new games.

Google has announced that it will drop support for 3rd party email clients using less secure technologies for logins, and that most likely means that SimpleMail and YAM will stop working with Gmail finally in summer 2022. Thank g... thanks to the hard work by Jacek, and others in the MorphOS team, we now have a modern email application that has been verified by Google itself and uses the required OAuth2 authentication with Gmail, Outlook, Yahoo!, etc.. A new version of Iris is now bundled and integrated within the OS. 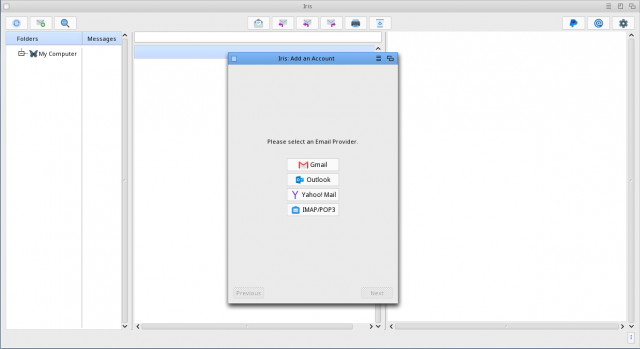 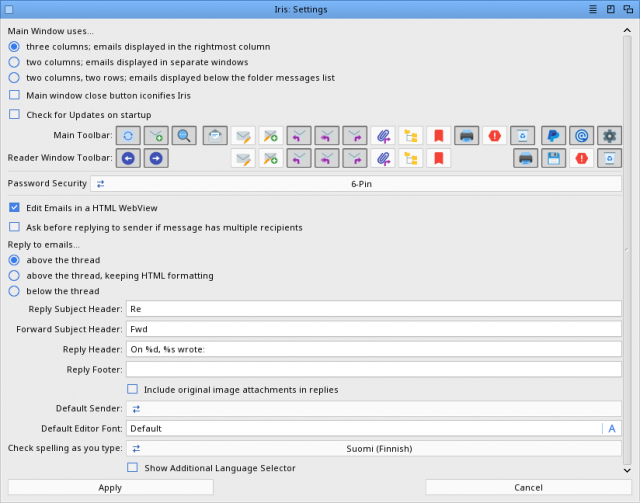 Another milestone in networking is the Wayfarer browser, which now replaces the Odyssey Web Browser in the MorphOS distribution with the new 2.10 version. OWB served us well, but maintaining its engine became almost impossible. Wayfarer is based on a recent WebKit branch, and written from scratch with heavy modifications on operating system components. Keeping the engine updated should also be an easier task for developers. The last OWB version from the MorphOS team will be available separately from software repositories like MorphOS Storage, but it is considered to be abandoned from now on. 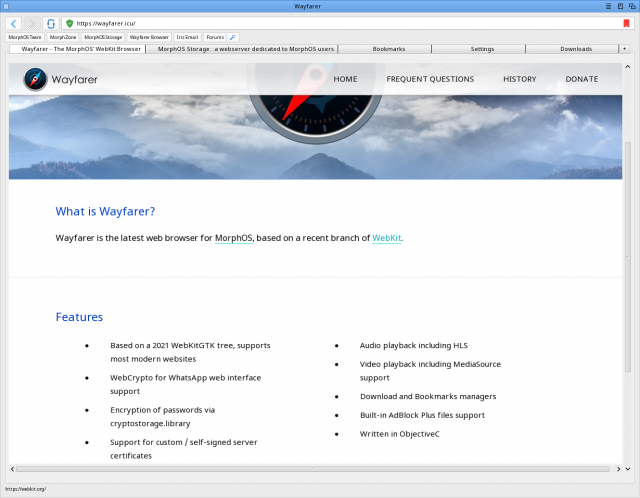 WebFontInstaller is a new tool to download and install more suitable fonts for web use. It replaces the font downloader included with OWB. 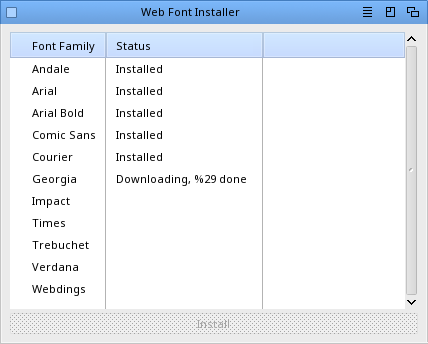 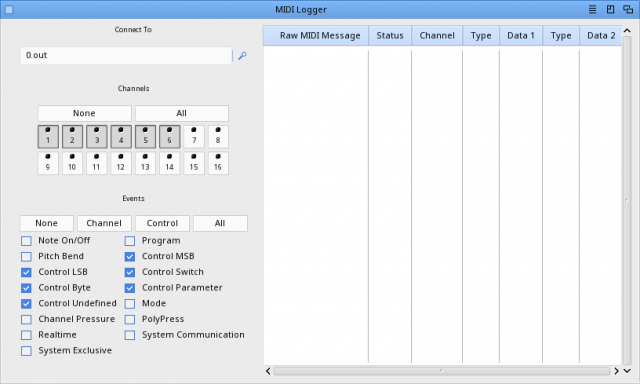 Wordy is a Mastermind inspired word game with support for multiple languages. 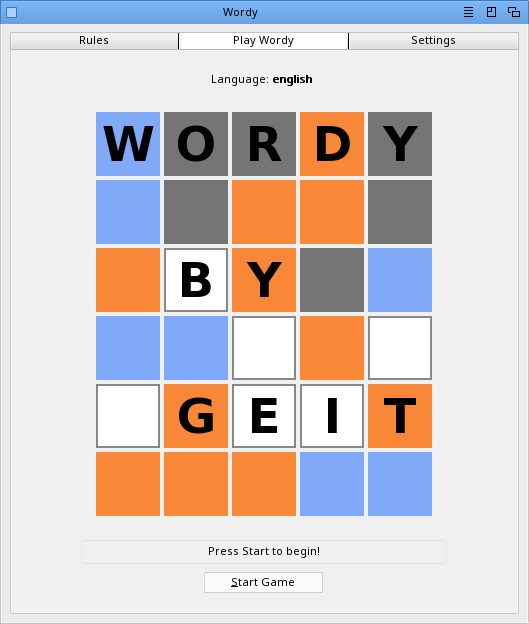