MorphOS has limited support for multi-display setups. On the hardware side there's multi-head support for selected Radeon R3xx/R4xx cards and configurations, including PowerBook5,x and PowerMac G5 setups. It's also possible to use multiple separate graphics cards in certain setups.

On the software side, in users' perspective, multi-display setups rely on the screens concept, which is inherited from AmigaOS. Separate screens can be configured to be opened on separate displays/monitors. The Ambient desktop will always be on its own screen and it can't be stretched over several screens, it's displayed on one monitor only, but you can open other programs on other monitors quite freely and decide which program is displayed on which monitor.

There also isn't a system provided way to move the mouse pointer to another screen by moving it over the screen borders, but it must be done by cycling the screens just like when using multiple screens on a single monitor setup.

When booting a multi-display setup first time, the Ambient screen opens on the biggest or first display it finds. The other display(s) should show a mirrored image of the Ambient screen, but it may fail depending on monitor specifications.

Which screen is displayed on which monitor can be configured from the Screens preferences in the MorphOS system settings. There you can edit existing screens or create whole new screens.

To change the monitor a screen is displayed on, double-click the corresponding entry in the screens list and the Edit Screen window should open. 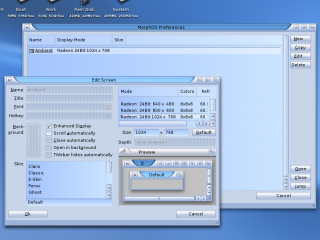 The mode list shows all available screenmodes on the computer, and these can be selected for the screen we are editing. Mode names start with the graphics cards' name. On single-display setups all modes have the same name, but on multi-display setups the mode names reveal on which monitor the mode will be shown. On multi-head setups (single card/chipset, but several outputs), names only differ by the number added at the end of the names.