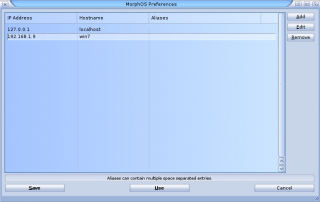 A prettier solution is to add a hostname for the server IP address, if you haven't done that already, and use that instead of the numerical address. That can be done from the Hosts settings in the MorphOS preferences.

If you want to be able to unmount the shares with the Eject screenbar module, you'll have to decide to use a certain pattern with device names you mount and add the pattern to the Eject module's settings. If you keep using device names like NetFS0, NetFS1, NetFS3, etc, you could add NetFS#[0-9] or NetFS#? or similar to the Unmount pattern.

The RDesktop application included in MorphOS displays a remote machine's desktop on your computer, but it can also mount a local directory on a remote machine. If you're using RDesktop to control a remote machine, it's a good way to share MorphOS files to the remote machine without needing to install any other services on your MorphOS computer.