Let's type this into a text editor and save it as a file called RAM:firsttest.hws:

The first line is a preprocessor command which loads the given image file as a Hollywood background picture. Objects in Hollywood are handled by their ID numbers, and in this case we load the image as a bgpic number 1. That bgpic is also loaded initially when the application opens its window.

The second line prints the "Hello World!" text at x=100, y=10 (in pixels) over the background image.

The third line waits for the user to press the left mouse button. Without this line, the program would just end and close its window, and we wouldn't see much.

The last line is a comment line, which is just a note inside the code. Comment lines can be inserted between /* and */, or the rest of the line can be commented out with the ; character. 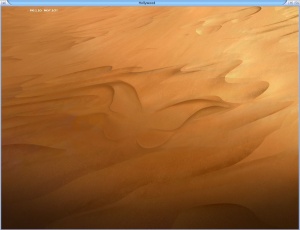 Let's run the script to see the results. Hit the F4 key in Cubic IDE or type this in the shell:

Next let's compile the program into a standalone executable. Hit the F2 key in Cubic IDE or use the shell (you don't have to define the paths if you've already changed directory to RAM: in the shell):

Now we have a new executable file that also contains the preprocessed/linked background graphics in it. The program works even if you don't have the Arida.png file in the system.

> Proceed to the next example